The Republican tax plan under the Trump regime would basically benefit the richest people in the country at the expense of the poorest ones.

Over the last two years, the President has released several different tax plans that would deliver trillions of dollars in tax cuts to the wealthiest Americans and corporations but do little to help working families. Yet, he’s consistently promised to help the middle class: in his inaugural address, for example, he said that “every decision” on taxes will “be made to benefit American workers and American families.” In fact, if President Trump’s proposed tax cuts are paid for through the types of spending cuts he has proposed in his budget, low- and middle-income Americans would clearly end up far worse off.

Perhaps the most important question about the Trump tax plan for low- and middle-income Americans is who will pay for the tax cuts for high-income people and corporations. The Trump plan doesn’t include proposals to fully pay for the tax cuts by closing tax loopholes or scaling back tax breaks at the top; it would cost more than $3.5 trillion, even counting all the possible revenue-raising provisions that the Trump campaign and Administration have mentioned. Sooner or later, the cost must be offset through some combination of spending cuts and tax increases.

If that cost is paid for through the types of spending cuts the President proposed in his 2018 budget, the vast majority of Americans would be net losers, a new TPC analysis indicates (see chart). Households in the middle fifth would lose an average of $1,500 once the costs of paying for the Trump tax cuts are counted. Nearly all — 94 percent — of these households would be “net losers,” losing more from the offsets than they’d gain from the tax cuts. Essentially every household in the bottom two-fifths of the income spectrum would be a net loser, losing an average of more than $2,000 in after-tax income. Meanwhile, the top 0.1 percent of households would gain about $935,000 each on average. 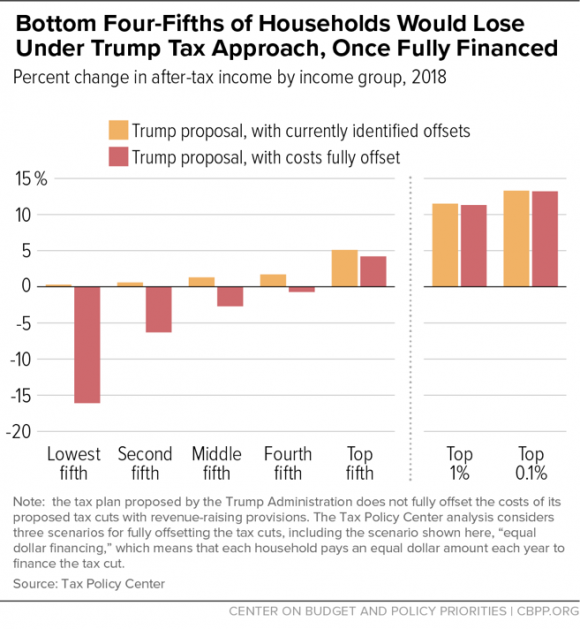