Imagine what that money could have been used differently for. It’s been known to competent economists for a long time that spending on public goods such as educational initiatives and technological and infrastructure development are far more efficient uses of taxpayer expenditures.

A new analysis offers a damning assessment of the United States’ so-called global war on terror, and it includes a “staggering” estimated price tag for wars waged since 9/11—over $5.6 trillion.

The Costs of War Project at Brown University’s Watson Center says the figure—which covers the conflicts in Iraq, Syria, Afghanistan, and Pakistan from 2001 through 2018—is the equivalent of more than $23,386 per taxpayer.

The center’s figure is far greater than the $1.5 trillion the Pentagon estimated (pdf) in July for the costs of the wars in Afghanistan, Iraq, and Syria, as it gives a fuller picture by including “war-related spending by the State Department, the Department of Veterans Affairs, and Homeland Security,” writes Neta C. Crawford, a professor of political science at Boston University.

Her report notes that even the $5.6 trillion tally underestimates the true figures, as it doesn’t capture “every budgetary expense related to these wars,” such as state and local costs to take care of veterans; nor does it take into account the funds used for military equipment “gifts” to countries involved in the conflicts.

“In sum,” it states, “although this report’s accounting is comprehensive, there are still billions of dollars not included in its estimate.”

Moreover, a full accounting of any war’s burdens cannot be placed in columns on a ledger. From the civilians harmed and displaced by violence, to the soldiers killed and wounded, to the children who play years later on roads and fields sown with improvised explosive devices and cluster bombs, no set of numbers can convey the human toll of the wars in Iraq and Afghanistan, or how they have spilled into the neighboring states of Syria and Pakistan, and come home to the U.S. and its allies in the form of wounded veterans and contractors. Wars also entail an opportunity cost—what we might have done differently with the money spent and obligated and how veterans’ and civilians’ lives could have been lived differently.” 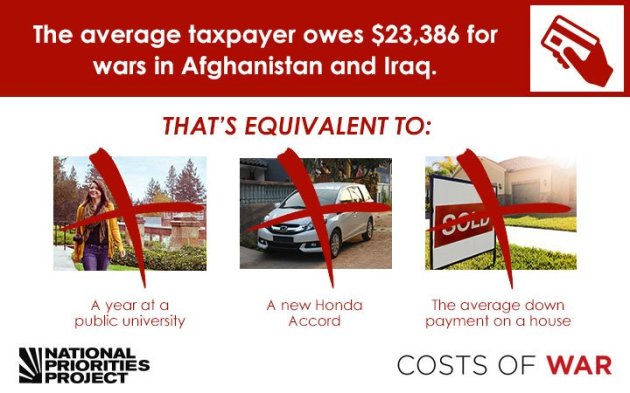 Echoing a point made by other observers of failed U.S. counter-terrorism strategies, the report states that “the more people the U.S. kills, the more seem to join the organizations the U.S. was already fighting, even as new radical groups spring up.”

The report also suggests the war costs will only continue to pile up: “There is no end in sight to the U.S. military presence in Afghanistan and the associated operations in Pakistan. Similarly, despite recent gains, there is little clear sense of how long the U.S. will be engaged in Iraq and Syria.”

Reacting to the new report, William D. Hartung , director of the Arms and Security Project at the Center for International Policy, writes in an op-ed at The Hill: “Was this huge expenditure of blood and treasure worth it? Did it substantially reduce the risks of terrorism, or reduce the likelihood of future conflicts? The short answer is no.”