There’s a potent chance that this revelation will return in the coverage of a significant news story in the future. Mercury isn’t the only danger hidden in the permafrost, of course, as greenhouse gases such as methane are also found there too. And as methane traps about 86 times more heat than an equivalent amount of carbon dioxide does, that makes its potential of escalating climate change worrisome.

Mercury though is yet another confirmation that climate change is a truly serious problem that must be addressed. It wouldn’t be much of a surprise to find other worrying threats waiting to be melted in the permafrost either. 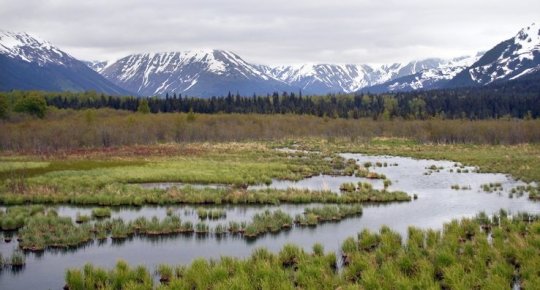 Researchers have discovered permafrost in the northern hemisphere stores massive amounts of natural mercury, a finding with significant implications for human health and ecosystems worldwide.

In a new study, scientists measured mercury concentrations in permafrost cores from Alaska and estimated how much mercury has been trapped in permafrost north of the equator since the last Ice Age.

The study reveals northern permafrost soils are the largest reservoir of mercury on the planet, storing nearly twice as much mercury as all other soils, the ocean and the atmosphere combined.

The new study was published today in Geophysical Research Letters, a journal of the American Geophysical Union.

“This discovery is a game-changer,” said Paul Schuster, a hydrologist at the U.S. Geological Survey in Boulder, Colorado and lead author of the new study. “We’ve quantified a pool of mercury that had not been done previously, and the results have profound implications for better understanding the global mercury cycle.”

Warmer air temperatures due to climate change could thaw much of the existing permafrost layer in the northern hemisphere. This thawing permafrost could release a large amount of mercury that could potentially affect ecosystems around the world. Mercury accumulates in aquatic and terrestrial food chains, and has harmful neurological and reproductive effects on animals.

“There would be no environmental problem if everything remained frozen, but we know the Earth is getting warmer,” Schuster said. “Although measurement of the rate of permafrost thaw was not part of this study, the thawing permafrost provides a potential for mercury to be released — that’s just physics.”

The new findings have major implications for understanding how Earth stores mercury and for human and environmental health, according to James Shanley, a research hydrologist at the U.S. Geological Survey in Montpelier, Vermont, who was not involved with the new research.

“This study is very novel and makes a big discovery in an area that was previously somewhat ignored,” Shanley said. “It shows permafrost represents a huge source of mercury, and if it thaws due to climate change the mercury could be released and could significantly add to the global mercury burden.”

The study found approximately 793 gigagrams, or more than 15 million gallons, of mercury is frozen in northern permafrost soil. That is roughly 10 times the amount of all human-caused mercury emissions over the last 30 years, based on emissions estimates from 2016.

The effects of the released mercury

Scientists are still unsure how much of the stored mercury would affect ecosystems if the permafrost were to thaw. One major question revolves around how much of the mercury would leach out of the soil into surrounding waterways, according to Steve Sebestyen, a research hydrologist at the USDA Forest Service in Grand Rapids, Minnesota, who was not involved with the new research.

If the mercury is transported across waterways, it could be taken up by microorganisms and transformed into methylmercury, he said. This form of mercury is a dangerous toxin that causes neurological effects in animals ranging from motor impairment to birth defects.

“There’s a significant social and human health aspect to this study,” Sebestyen said. “The consequences of this mercury being released into the environment are potentially huge because mercury has health effects on organisms and can travel up the food chain, adversely affecting native and other communities.”

The release of mercury could also have far-reaching global consequences, according to Shanley. Mercury released into the atmosphere can travel large distances and could affect communities and ecosystems thousands of miles away from the release site, he said.

Schuster believes his team’s research gives policymakers and scientists new numbers to work with and calibrate their models as they begin to study this new phenomenon in more detail. He intends to release another study modeling the release of mercury from permafrost due to climate change, and said this work changes scientists’ perspective of the global mercury cycle.

“24 percent of all the soil above the equator is permafrost, and it has this huge pool of locked-up mercury,” he said. “What happens if the permafrost thaws? How far will the mercury travel up the food chain? These are big-picture questions that we need to answer.”