The Cloud Act would allow for dangerous violations of consumer privacy rights through abusing the stored data corporations have on people. U.S. citizens, I encourage you to oppose this type of legislation. Privacy rights are going to become much more important in the next several years ahead as more and more of society is effused with technological infrastructure.

Civil libertarians and digital rights advocates are alarmed about an “insidious” and “dangerous” piece of federal legislation that the ACLU warns “threatens activists abroad, individuals here in the U.S., and would empower Attorney General Sessions in new disturbing ways.”

The Clarifying Lawful Overseas Use of Data or CLOUD Act (S. 2383 and H.R. 4943), as David Ruiz at Electronic Fronteir Foundation (EFF) explains, would establish a “new backdoor for cross-border data [that] mirrors another backdoor under Section 702 of the FISA Amendments Act, an invasive NSA surveillance authority for foreign intelligence gathering” recently reauthorized by Congress.

Ruiz outlines how the legislation would enable U.S. authorities to bypass Fourth Amendment rights to obtain Americans’ data and use it against them:

The CLOUD Act allows the president to enter an executive agreement with a foreign nation known for human rights abuses. Using its CLOUD Act powers, police from that nation inevitably will collect Americans’ communications. They can share the content of those communications with the U.S. government under the flawed “significant harm” test. The U.S. government can use that content against these Americans. A judge need not approve the data collection before it is carried out. At no point need probable cause be shown. At no point need a search warrant be obtained.

The EFF and ACLU are among two dozen groups that banded together earlier this month to pen a letter to Congress to express alarm that the bill “fails to protect the rights of Americans and individuals abroad, and would put too much authority in the hands of the executive branch with few mechanisms to prevent abuse.”

“This controversial legislation would be a poison pill for the omnibus spending bill,” declared Fight for the Future’s deputy director, Evan Greer. “Decisions like this requires rigorous examination and public debate, now more than ever, and should not be made behind closed doors as part of back room Congressional deals.”

The group also pointed out that big tech companies such as Apple, Facebook, and Google are among those lobbying lawmakers to include the CLOUD Act in the spending bill: 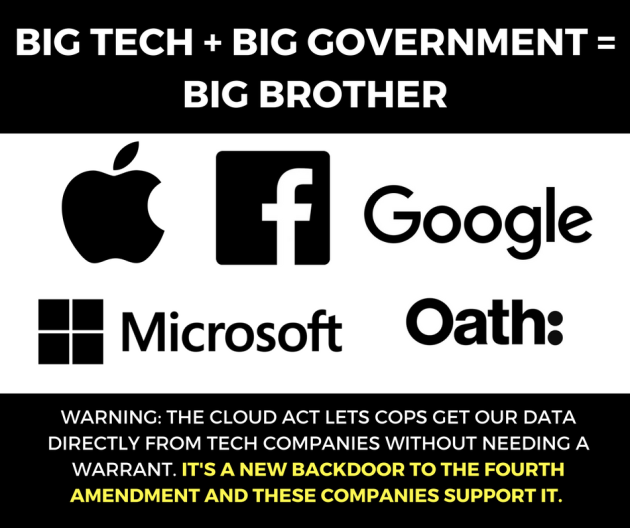