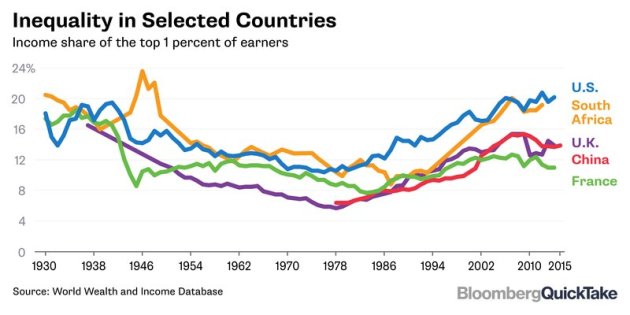 An interesting article on inequality. The journalist is probably of the class who feel some guilt for benefiting from the unjust, enormous upwards redistribution of income that’s happened in the last four decades. The income share of the top 1 percent in the U.S. has doubled from its share during most of the 1950s to 1980. This is an amount high enough to increase the income of people in the lowest 90 percent of the country’s income distribution by over 20 percent, and it’s nearly enough to double the income share of the bottom 40 percent.

I have my disagreements with the article, and it doesn’t offer many solutions relative to its lengthiness. In brief though, one of the most important ways to reduce inequality is to stop wealth from being distributed so unequally to begin with. Market structures have been rigged in all sorts of ways to benefit the wealthy, and instead of only focusing on tax and transfer policy, pre-tax distributions of income need to be focused on more.