Over the last several decades in the U.S., productivity gains have been concentrated in the upper echelon of the income distribution. The general population hasn’t really received them. 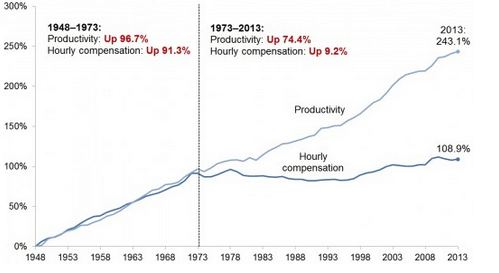 Productivity means the average output per hour in the economy. This has increased due to technological advances such as faster computer processing power and workers becoming more efficient at their jobs.

The story of robots taking all the jobs is today printed in the mass media with some regularity. However, if the robots were actually taking all the jobs today, it would show up in the data. Massive automation implies massive increases in productivity, but as it is now, productivity gains rates have been quite low. Yearly productivity growth was higher in 2003 than it is today, and since about 2005 there’s been a slowdown in it. So based on the trend of the last dozen years, it is unlikely enough that we will see significant advances in productivity (automation) over the next several years.

Society should be structured so that in the next decades, productivity gains will be distributed to the general population instead of primarily to upper-middle class and wealthy people. In a significant way, this will depend on who owns the technology.

It’s crucial that there be real care taken on the rights awarded to people owning the most valuable technology. This may frankly determine whether that technology is a curse or a blessing for humanity.

In one example, say that the groundbreaking designs for the most highly advanced robotics are developed by a major corporation, which then patents the designs. The patent is valuable since the robotics would be far more efficient than anything else on the market, and it would allow the corporation to charge much higher prices than would otherwise be possible. This would be good for the minority of people who own the company and are invested in it, but it would almost certainly be harmful to the general public.

The case of prescription drugs shows us what happens when legal enforcement via patents goes wrong. The United States spent $450 billion on prescription drugs in 2017, an amount that would have been about a fifth as much (representing thousands of dollars per U.S. household in savings) were there no drug patents and a different system of drug research incentives. The consequence of this disparity is obviously that there are many people who suffer with health ailments due to unnecessarily expensive medications.

The major corporation with the valuable robotics patents may be able to make the distribution of the valuable robotics (which could very efficiently perform a wide range of tasks) much more expensive than necessary, similar to the prescription drugs example. The robotics being too expensive would mean that there’d be less of them to do efficient labor such as assembling various household appliances, and this would manifest itself as a cost to a lot of people.

So instead of the advanced robotics (probably otherwise cheap due to the software and materials needed for them being low cost) being widely distributed inexpensively and allowed to most efficiently automate labor, there could be a case where their use is expensively restricted. The robotics may even be used by the potentially unaccountable corporation for mostly nefarious ends, and this is another problem that arises with the control granted by the patents. Clearly, there need to be public interest solutions to this sort of problem, such as avoiding the use of regressive governmental interventions, considering the use of shared public ownership to allow many people to receive dividends on the value the technology generates, and implementing sensible regulatory measures.

There are also standards that can be set into law and enforced. A basic story is that if (after automation advances lead to less labor requirements among workers generally) the length of the average work year decreases by 20 percent, about 25 percent more people will be employed. The arithmetic may not always be this straightforward, but it’s a basic estimate for consideration.

Less time spent working while employing more people is clearly a good standard for many reasons, particularly in the U.S. where leisure rates among most are low compared to other wealthy countries. More people being employed may also mean tighter labor markets that allow for workers to receive higher real wage gains.

If there is higher output due to technology, that value will go somewhere in the form of more money. Over the last decades we have seen this concentrated at the top, but it is possible to have workers both work shorter hours and have similar or even higher pay levels.