Previous methods of visualizing anatomy have missed seeing this development.

Researchers have identified a previously unknown feature of human anatomy with implications for the function of all organs, most tissues and the mechanisms of most major diseases.

Published March 27 in Scientific Reports, a new study co-led by an NYU School of Medicine pathologist reveals that layers of the body long thought to be dense, connective tissues — below the skin’s surface, lining the digestive tract, lungs and urinary systems, and surrounding arteries, veins, and the fascia between muscles — are instead interconnected, fluid-filled compartments.

This series of spaces, supported by a meshwork of strong (collagen) and flexible (elastin) connective tissue proteins, may act like shock absorbers that keep tissues from tearing as organs, muscles, and vessels squeeze, pump, and pulse as part of daily function.

Importantly, the finding that this layer is a highway of moving fluid may explain why cancer that invades it becomes much more likely to spread. Draining into the lymphatic system, the newfound network is the source of lymph, the fluid vital to the functioning of immune cells that generate inflammation. Furthermore, the cells that reside in the space, and collagen bundles they line, change with age, and may contribute to the wrinkling of skin, the stiffening of limbs, and the progression of fibrotic, sclerotic and inflammatory diseases.

The field has long known that more than half the fluid in the body resides within cells, and about a seventh inside the heart, blood vessels, lymph nodes, and lymph vessels. The remaining fluid is “interstitial,” and the current study is the first to define the interstitium as an organ in its own right, and as one of the largest of the body, say the authors.

New species of fish are being discovered in what’s being referred to as the Rariphotic zone. Deep reef ecosystems could still be explored much more.

It’s always been there, but a layer of the ocean is so distinct from the waters above and below it that it needed its own category.

Scientists have just defined the newly named rariphotic zone, a layer of ocean between depths of 130 and 300 metres (400 and 1,000 feet) – a low-light or “twilight zone” in deeper reef regions.

It sits just below the mesophotic zone, between 40 and 150 metres (131 and 492 feet), where medium light penetrates – the optimal waters for tropical coral reefs. And it’s teeming with previously unknown fish – a whole newly discovered ecosystem.

These fish are closely related to reef fish, which researchers didn’t think could live below the mesophotic.

This has led to a hypothesis that the new rariphotic zone may be a refuge for shallower reef fishes seeking respite from the warming waters and coral deterioration caused by climate change.

There’s a lot we don’t know about the ocean, simply because it’s so difficult for us to access. It was only thanks to advances in submersible technology that marine scientists have been able to explore down below the reef off the coast of Curaçao.

“It’s estimated that 95 percent of the livable space on our planet is in the ocean, yet only a fraction of that space has been explored,” said study lead author Carole Baldwin of the NMNH.

“That’s understandable for areas that are thousands of miles offshore and miles deep. But tropical deep reefs are just below popular, highly studied shallow reefs – essentially our own backyards. And tropical deep reefs are not barren landscapes on the deep ocean floor: they are highly diverse ecosystems that warrant further study. We hope that by naming the deep-reef rariphotic zone, we’ll draw attention to the need to continue to explore deep reefs.”

An important finding through studying animals reveals itself again, and the fight against antibiotic resistance is among the most serious issues of the 21st century.

Researchers previously discovered that platypus milk confers antimicrobial protection to the species’ young, and now a new study led by scientists at Australia’s CSIRO has figured out what it is about platypus milk that’s so effective against bacteria.

“Platypus are such weird animals that it would make sense for them to have weird biochemistry,” says one of the team, molecular biologist Janet Newman.

“By taking a closer look at their milk, we’ve characterised a new protein that has unique antibacterial properties with the potential to save lives.”

It’s possible, the team thinks, the platypus evolved to produce its antimicrobial Shirley Temple curls, as a defence against bacteria attracted to this exposed milk, ensuring the pups got fed, not bugs in the environment.

That’s just a hypothesis at the moment, but now that we know about the molecular structure of this natural antimicrobial structure, the team says we might be able to replicate the protein for antibiotic medications – providing us with a new means of fighting the growing scourge of antibiotic resistance.

It’s not the first time this unusual animal has come to our aid. In 2016, researchers discovered a hormone contained in platypus venom could actually help us develop new kinds of diabetes treatments.

Not bad for a wacky hybrid of stitched-together animal parts that’s probably just a joke somebody’s playing on us. Not bad at all.

“You can find discoveries in all sorts of places.”

This discovery has immense potential to help people in areas that lack water. Only 3 percent of the world’s total water is freshwater — the rest is saltwater, with inadequate desalinization advances — so access to water indeed looks to become a more major issue in the years ahead.

Scientists have developed a device that can suck water out of desert skies, powered by sunlight alone. They hope that a version of the technology could eventually supply clean drinking water in some of the driest and poorest parts of the globe.

The device is based on a novel material that can pull large amounts of water into its many pores. According to a study published in the journal Science on Thursday, a kilogram of the material can capture several liters of water each day in humidity levels as low as 20 percent, typical of arid regions.

The technology could help address a big and growing problem. A report last year in Science Advances found that four billion people, nearly half in India and China, face “severe water scarcity at least one month of the year.” That means water shortages affect two-thirds of the world’s population. These shortages—and the resulting conflicts—are only expected to become more common in large parts of the world as climate change accelerates.

A team at MIT developed the technology with Omar Yaghi’s laboratory at the University of California, Berkeley. The key component is a promising class of synthetic porous materials called metal-organic frameworks, composed of organic molecules stitched together with metal atoms, which Yaghi pioneered (see “A Better Way to Capture Carbon”). The size and chemical character of the material’s pores can be customized to capture particular types of molecules or allow them to flow through. The material also has a massive surface area, on the order of a football field per gram, enabling it to bond with a large quantity of particles.

In this case, the scientists employed a previously developed version of the material that Yaghi optimized to efficiently capture water molecules. The prototype bonds with water at night or in shade. But during the day, sunlight hitting the material adds enough energy to convert the water molecules into vapor. In turn, they slip out of the material’s pores and into an adjacent acrylic enclosure. A condenser at the bottom of the vessel collects the water droplets and funnels them into a chamber below, from which clean water can be collected.

The process is completely passive, with no need for solar panels, batteries, or additional energy. Previous water-harvesting technologies have been limited to areas with fog or other high-moisture conditions.

Though they plan to continue refining the technology, they’re “not that far away” from a viable product, says Evelyn Wang, head of MIT’s device research laboratory. She notes that materials of this type are already being mass-produced, at increasingly affordable prices, by the German chemical giant BASF.

Yaghi says the technology could be paired with solar panels or other equipment to boost water production for industrial or agricultural purposes. But the big hope, he says, is that these devices could become household fixtures in poorer parts of the world. That would allow families to reliably produce their own water instead of rationing whatever they can carry, or whatever is available, from community wells.

Earlier this year a new species of deep water shark, Etmopterus lailae, was discovered in waters surrounding the Northwestern Hawaiian Islands in the Pacific Ocean.

Measurements of external features, teeth, vertebrae and intestines, along with specific external markings and patterns confirmed that it was indeed a new species – a member of the lanternshark family. Lanternsharks (Etmopteridae) are one of the most species-rich shark genera, with approximately 38 known species, 11 of which have been described since 2002.

The lanternsharks are one of two deep sea shark families to possess the ability to bioluminesce – in other words, they are able to glow in the dark. The other shark family with the ability to do this are the kitefin sharks (Dalatiidae). This family houses the infamous cookie cutter shark, which was known for its impressive ability to disable US Navy submarines in the 70s and 80s, by testing how the electrical cables and rubber sonar domes rated on a culinary scale (Johnson 1978). Imagine being the officer who had to report back about how the submarines were defeated by a particularly voracious … 22 inch (56cm) shark! 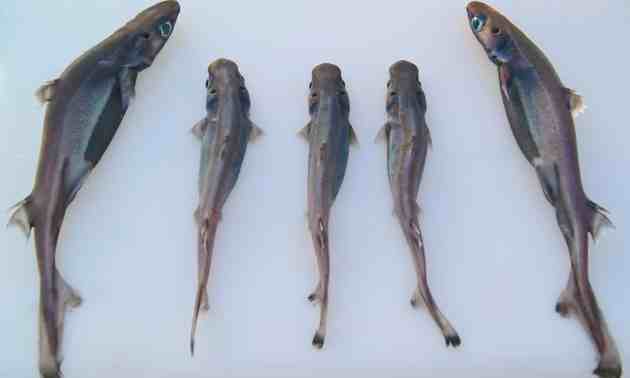 Bioluminescence is the emission of light as a result of a biochemical reaction. In contrast to fluorescence and phosphorescence, bioluminescenct reactions do not require the initial absorption of sunlight or other electromagnetic radiation by a molecule or pigment to emit light. 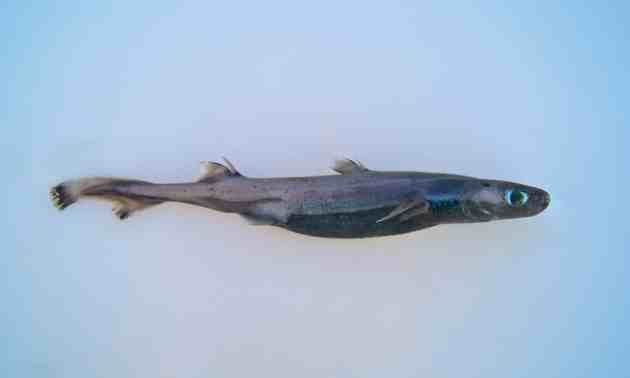 Most fish bioluminesce by using their light organs (photophores) in one of two ways: harnessing the light produced by symbiotic bacteria or producing their own light through chemical reactions. However, shark luminescence works in a different way.

The velvet belly lantern shark (Etmopterus spinax) was used as a model for experimental studies on shark luminescence. It emits visible light from thousands of tiny epidermal photogenic organs – photophores – which are made of a cluster of photogenic cells called photocytes.

The organisation of the photophores strongly suggests that they are involved in varied behaviours, including anti-predatory response (camouflage) and intraspecies communication.